The Loewy Law Firm is very honored to represent Noe Nino de Rivera, a 17 year old who was unjustifiably TASED by a Bastrop Sheriff Deputy last November at Cedar Creek High School. As a result of the TASING, Noe fell back and slammed his head on the ground and sustained a Traumatic Brain Injury.

Recently, the Bastrop Sheriff’s Office released video of an interview and walk-through with officers Randy McMillan and Timothy Stalcupp, who were at the scene. McMillan and Stalcupp claim that Noe was acting violent but both eyewitness and security video footage dispute these accounts.

KVUE, KEYE and the Austin-American Statesman devoted extensive coverage to this story and you can watch here:

Picture below from an earlier press conference with Noe’s family: 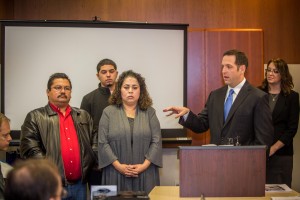