I-35 HazMat: Dangerous Trucks Still on 1-35 Despite Rerouting Laws 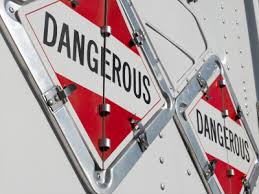 Tonight on KXAN, an investigative report will look into the ongoing hauling of dangerous HazMat cargo on I-35 despite laws mandating an alternate route.

This is a problem that the city must address. With the increase in population alongside I-35 traffic, this is exceedingly dangerous and simply a recipe for disaster.

The original article is below – stay tuned for the Investigation tonight at 6 PM.

AUSTIN (KXAN) – Every day thousands of Austinites use Interstate 35 on their drive to and from work or school, travelling right next to fuel tankers and other commercial tractor trailers hauling potentially dangerous cargo. A new KXAN Investigation reveals expensive delays City Transportation planners are facing in securing a state-mandated alternate route for those trucks. It was supposed to have been done when the city’s population reached 850,000. That was in early 2013.

Investigator Robert Maxwell also shows how Texas State Codes meant to protect the traveling public have little bite to enforce how quickly a growing city like Austin gets a hazardous cargo route in place before another fuel tanker crash like one in 2010 at US 183 and MoPac. It burned so hot, fire crews say the wreck threatened the stability of the four-level overpass network at one of Austin’s busiest traffic interchanges. A second fuel tanker roll over in 2012 on northbound I-35 at Slaughter Lane caused not only hours-long backups for city-bound commuters, but environmental damage when 2,900 gallons of fuel spilled into a grassy median.

One City leader admitted to Maxwell “Knock on wood, we haven’t had a major incident occur here… it’s a gamble.”