Across all roadways in Austin, there has been an uptick in the number of crashes resulting in fatalities in 2015. One headline from August reported Police: More people are dying on Austin roads this year.  At that time, there were a reported 67 deaths. 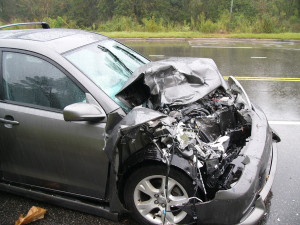 To recap just some of what we have seen in the area in just the past six months:

According to a media report from local channel KXAN, Austin Police Department records indicate 1,188 DWI and DUI collisions in 2015 compared to 1,080 collisions in 2014. So far of those numbers of collisions 20 were fatal this year and 19 were fatal by this time last year. The APD further reports that the number of deaths on the road as of August is almost double numbers from the same time frame in 2014 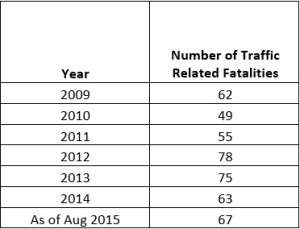 Austin’s Public Safety Commission has been collecting data specific to these accidents for tracking and measurement purposes. The following data was gathered through month ending August, 2015 (most recent available):
Location

Day of the Week

Speed stands out as the number one and number two contributing factors in both motor vehicle and motorcycle fatalities. In various studies performed by multiple agencies, speed has been identified as a major risk factor in the incidence of accidents and the severity of injuries as a result of those collisions. It is estimated that speed is attributed to an average of 30% of roadway deaths. Consider the following:

According to the National Safety Council, crashes related to speeding are said to cost society $40.4 billion per year. That equates to $76,865 per minute or $1,281 per second. The economic costs are tremendous, but so are the costs in lives. The most recent available Census data specific to speeding-related fatalities (2009) reveals 10,591 deaths nationwide. California had the second highest death toll in the nation with 1,087.  Texas took the top spot with 1,228. The highest concentration of accidents was non-interstate at speeds in excess of 55 miles per hour.

The Vision Zero Taskforce, an initiative adopted by Austin to drastically reduce transportation-related injuries, reports Austin currently ranks as the 13th most dangerous city for traffic and the 7th most dangerous city for pedestrians, with greater than 700 people killed on Austin roadways since 2004. The taskforce, through a combination of strategies to include education, enforcement, and engineering, seek to eliminate traffic deaths and serious injuries. Initiated in Austin by the Pedestrian Advisory Council in 2014 and supported by numerous departments and community groups, the taskforce embraces four key principles:

There is no doubt that every member of the community plays a role in preventing traffic fatalities. The following are some safety tips for the general public can use avoid being party to an accident:

The Loewy Law family has seen the devastation that accidents cause. Though we owe it to one another to watch our surroundings and use care – and most people do – accidents still happen. In those instances, you can turn to the Loewy Law Firm to help you work with the insurance companies, navigate the legal system, and understand your rights.