On July 28, Adam Loewy joined family and friends of Larry Jackson Jr. at a moving vigil to commemerate the 1-year anniversary of his murder by Charles Kleinart, a former member of the Austin Police Department. Our law firm is very honored to represent Larry’s parents, Billie and Larry Mercer, in their quest for justice.

APD Detective Charles Kleinart tracked Larry Jackson down in a state of blind rage after confronting him at the Benchmark Bank in central Austin. He brutally beat Larry, breaking his ribs and perforating his colon, and then murdered him by putting his gun to the back of Larry’s neck and pulling the trigger. The coroner later concluded that the actual muzzle of the gun was on Larry’s neck.

Our law firm lobbied the Travis County District Attorney’s Office to investigate this case thoroughly and they did so, culminating in a historic Manslaughter indictment in May 2014. This was the first time in modern history that an Austin Police Officer was indicted for a criminal act for killing a citizen.

We also have filed a Federal Civil Rights lawsuit in Federal Court and are seeking compensation for Larry’s loss from the City of Austin. That case is pending and will be set for trial in August – the trial will likely be after the criminal proceedings are over.

Our law firm specializes in civil rights cases – these cases are very important because there must be checks and limits on Government officials when they do wrong.

Coverage of the vigil and Adam Loewy’s comments can be seen here.

Picture of May 2014 press conference with Larry’s parents: 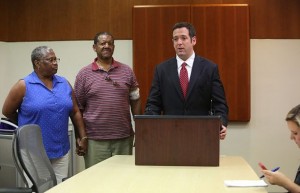