No Refusal at SxSW Nets 28 Arrests 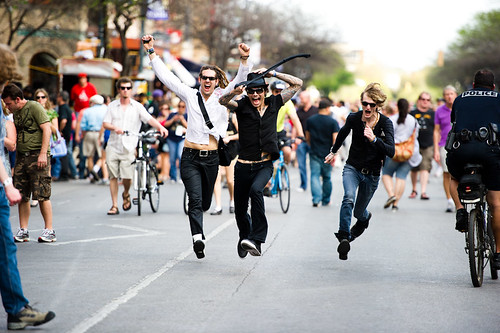 AUSTIN, TX – If you live in Austin, and maybe even if you don’t, you are familiar with the wildly popular South by Southwest (SXSW) weekend. This year’s event was as entertaining as events passed, and just as dangerous, though most participants were blissfully unaware.

Thanks to Austin PD and their enforcement of a “No Refusal” weekend, 28 drunk drivers were taken off of the road. The enforcement was not without incident.

According to reports released by the court, 22-year-old Heather Ortega blew through a barricade just before 2 a.m. on Saturday morning in the 300 block of San Jacinto Blvd. Ortega attempted to drive north on a southbound only street that was clearly barricaded.

Police say that Ortega was on her cell phone at the same time a trooper attempted to prevent her from going the wrong way.

When another trooper was able to pull Ortega over, the woman registered a .196 on a preliminary breathalyzer test, a number that is more than twice the legal limit in Texas. Ortega admitted to only drinking a glass and a half of wine, and the woman refused any further testing.

As of Saturday night, 17 people had been arrested as part of the enforcement. Ortega’s arrest made up one of the 11 more that took place before the ‘No Refusal’ initiative ended.

Many people take the ‘No Refusal’ moniker literally. What no refusal really means is that police do not have to wait the normal amount of time for a warrant to take someone’s blood.

If you are pulled over during a ‘No Refusal’ weekend, you still have the right to refuse a breath test. The police then have the right to contact a judge on all to immediately sign a warrant to obtain a sample of your blood. That blood will be taken by a nurse or registered technician on scene.

The police cannot forcefully obtain a blood sample. If you refuse, however, the consequences are greater as you are now refusing a court order. The best bet? If you drink, stay off of the roads. If you go out with friends, designate a sober driver.

If you have been injured in a drunk driving accident, you need a compassionate attorney on your side. Call us as soon as possible so that we can begin working on your case. You deserve to be represented to the full extent of the law. Call now.