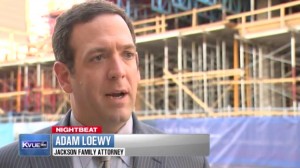 Currently The Loewy Law Firm is going to trial for a highly publicized case involving wrongful death. This case involves a young man who was shot in the back of the head by a police officer. It is controversial because it involves a black man who was shot around 34th street, a predominately white area . The case is set for trial and as the case proceeds and the facts come clear, we will be seeking justice for a man who was wrongfully killed.

Wrongful death results from negligence or an intentional act resulting in someone’s death. Wrongful death is a civil remedy against the person who was negligent or performed the intentional act. The case can be filed by family members, spouses, children, or anyone affected financially by the death of the person. In the case we are working on right now we are representing his immediate family.

Wrongful death cases can also be filed for death resulting from medical malpractice, product liability, a car accident that lead to the death, or in any event where the person acted negligently (failed to uphold reasonable behavior in the situation) or intentionally and this act lead to the death of the victim.

Damages in a Wrongful Death Case

Once we have proved that death resulted from an intentional or negligent act, we then calculate the damages owed to those affected. These can include four types of damages:

Fighting For The Justice You Deserve

Wrongful death cases are the most painful that we take on for our clients. Nothing can replace the loss or fill the void that a loved one feels from losing a significant person in their life. It’s not fair no matter how much money you are awarded. In many of these cases, the incident could have easily been prevented and we want to ensure that we are doing everything we can to get you damages you need to help recover and ensure that incidents similar to yours don’t happen again to others. As we move forward in this wrongful death case we will seek justice against any malicious conduct the police officer is responsible for and ensure that this type of wrongful death is prevented in the future.